All shipping orders have been paused through May while moving into our new location. Use code #newspringstudio! to get 30% off Hesperios products during this period.

In the spring of 1916, Sapper Ernest Johnson, a 32-year-old man from a rural town in Northern England was — like many men of his generation — sent to war.

A gentle-tempered man who enjoyed fiddling and hand-carving wooden birds, Johnson had never before left his small town of Tyneside, and the prospect of leaving behind the only life he knew — not to mention his wife and three young children — was daunting.

During his first week away, he resolved to keep a record of his journeys during the war as a way to orient himself and to create a history that he could share with his family when he returned.

Sapper Ernest Johnson began etched notes into the back of his violin.

The first entry read: ‘Left Buxton for France, 8/8/1915’ and is followed by 20 place names and dates where he saw action including well known battle locations in France, Belgium and Italy.

The entries also contain remarks about periods of leave as well as a note about meeting King George on the front line at Messines, Belgium.

All during the Great War, he kept a record of his moves, turning the instrument into an invaluable diary of his journey through the trenches of Europe. His notes included the names of the towns he visited, and details about his leave: “Left France for Belgium”, “Home for 10 days leave”, “Left Belgium for Italy.”

Legend has it that Johnson, a talented self-taught musician, used the instrument to perform for his fellow front line soldiers while in the trenches.

At the very top of his makeshift diary, he wrote: ‘This violin is with Sapper E Johnson 143152’ followed by his address in North Shields, Tyneside. The hope was that, if he was killed or separated from his instrument, it might find its way back to his family.

Eventually, the two were separated. Though the circumstances are unknown.

Johnson died in 1948. The violin was not discovered until many decades after, concealed in a plastic bag in an attic in France.

The detailed diary, which is etched in tiny, neat handwriting across the body of a wooden violin, covers three quarters of the back of the instrument, telling the story of Johnson’s travels from August 8th 1915 until February 18th 1918 where he finishes the diary with the words: “Finished with army,”

Johnson’s granddaughter has now restored the violin so she can learn the same songs performed by her grandfather in the trenches, including war-time favorites like “Roses of Picardy” and “Keep the Home Fires Burning.” 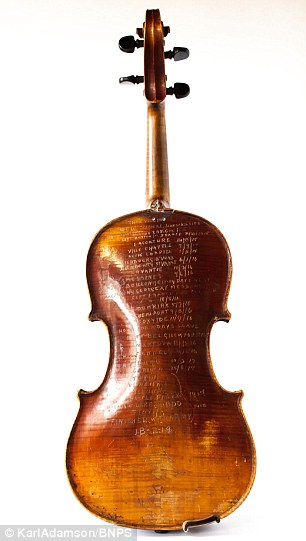 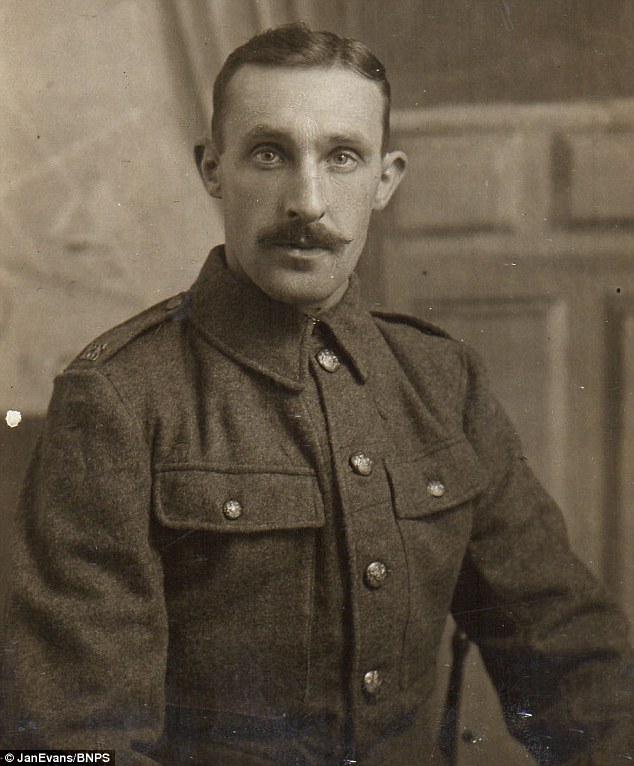 Sapper Ernest Johnson scratched names and dates of remarks about where he was serving and when he was on leave periods of leave on the back of his violin. (Jan Evans/BNPS)