1979, the writer and performer Spalding Gray sat for the first time at what would become his reliable stage set — a wooden desk with a notebook and glass of water at hand — and spoke nakedly about his life to a live audience. Five years later he performed his transformative monologue, “Swimming to Cambodia.” The film version made Gray a star.

Gray performed 15 monologues, four of which were made into films, and wrote an autobiographical novel, “Impossible Vacation.” He chronicled his tangled romantic yearnings, precarious emotional life and the unexpected sustenance he found in fatherhood. In 2004, Gray’s body surfaced in New York’s East River, an apparent suicide.

Gray, possibly the most celebrated neurotic of the New York literary world in his day, kept private journals throughout his long career. Kathleen Russo, Gray’s widow and the mother of his children, read the journals after her husband’s death and worked with an editor to have them published in 2011.

Though Gray was famous for his manic, unfiltered style of storytelling, the journals offer glimpses of an even rawer and more maniacal man. The pages are full of insecurity, fear, zeal, and frustration. Sentences scream out in all-caps letters. Exclamation points abound. So does his characteristically self-flagellating humor. Skiing is better than sex, Gray once said, “because for me a good round of sex might be seven minutes. Skiing you can do for seven hours.”

In 1982, while attending a party at George Plimpton’s Manhattan apartment, he notes that the scene seems weirdly “like a giant Updike book.” He responds to his uneasiness even more weirdly, by stealing a pile of Plimpton’s wooden coat hangers.

One thing that becomes clear while reading through the entries is that, over time, Gray grew so adept at turning his life into art that he began to fear he could no longer have a private experience without feeling a need to mediate and share it. His art, as these pages make obvious, is what kept him alive. “The paradox is that when I talk about myself,” he writes, “I forget myself.”

The literary world’s response to Spalding’s journals was not particularly significant, and reviews were mixed. Many people celebrated this opportunity to peer into the mysterious mind of the late monolgist but some were disappointed by what they found there. In his 2011 review of Gray’s then newly published journals, the New York Times critic Dwight Garner wrote:

“This is a beautiful book: handsome, well made, exceedingly well edited. What it doesn’t happen to be is a good book. In his journals Gray is the one thing he never allowed himself to be onstage: uninteresting.

He was an estimable performer but only a middling writer, a fact he grasped. “What I hate about my writing,” he said in a 1995 entry, is that “it has no insight in it.” His journals are shallow, repetitive and ruddy with psychobabble. He was a narcissist — other people barely existed for him — and thus his journals rarely even offer the pocket-size joys of intellectual or theatrical gossip. The actor Willem Dafoe was for many years his roommate, for example, yet Mr. Dafoe barely appears in these pages.

One of the things I find enduringly interesting about diaries is that each bears a unique and often unexpected story of how it came to be read by the likes of my or you. The context around a published diary is almost always more fraught than that which surrounds a normal book for the simple reason that, by and large, they are not works intended for publication. The story of how someone’s most private self-confidences get bound and printed is often full of coincidence, conflict, and chance.

Particularly notable about the story of Gray’s journals is that they were unearthed not by a scholar or editor or fellow writer, but by his widow. Learning that sparked a storm of curiosity in my mind: What must it have been like for her to read through them after his death? Did it feel like an invasion of privacy? A betrayal? Did she let them sit, undisturbed at his desk for several years before approaching the mammoth task? Did what she found change the way she thought about her marriage or her late husband? Was the experience — as one might expect — scarring? Or salutary?

Below, I have excerpted an interview with Russo that was published in the October 16, 2011 issue of the New York Times Sunday Review.

What prompted you to read the journals?

There were a couple of long months when Spalding was missing, before they found his body.  I missed him. I pulled the journals out, mostly because I wanted to hear his voice. The journals he kept in marble-covered composition books in the closet were a comfort.

What did you read first?

I looked for the journals in which he wrote about our happiest time together. I wanted to see how he documented our family life.

Was Spalding secretive about his journals?

Sometimes he left them out and open in the apartment, if you lived with him, it was your choice whether you wanted to read them or not. I think Spalding preferred someone discovering something about him through the journals to having to come clean in person.

Were you tempted to read the journals before he died?

And when you read the journals, did you find anything that suggested Spalding didn’t love you enough?

You always have doubts. In any relationship. And sometimes the truth hurts.

In reading the journals, I saw that he came to love me deeply — over the years. It was not love at first sight. It was something that grew over time.

Did reading about Spalding’s sex life — with other women and men — haunt you or warp your sense of your relationship with him?

What surprised you most about what you read in the journals?

When I thought Spalding was happier than ever before — when he was acting in the Broadway revival of “The Best Man” and we’d just had our second son — he was writing about being in his dressing room and crying and not knowing why.

I never knew how much he doubted his own work. He was paranoid about his career — nervous about doing the play and also wondering if he would ever be able to do another monologue now that he was a family man. I thought it was part of the act when, after every monologue, he would declare, “I have nothing more to say.”

I was startled by how lonely he felt — even among our chaotic family of three kids and two adults. I guess he felt lonely his whole life. In reading about how bad he felt about himself, I wished I had been able to be more supportive of him, to put my arms around him more.

Another thing that gave me pause when I read his private notebooks: I came across descriptions in which he criticized me physically. It wasn’t anything that he hadn’t said to me in person, but still, it stung.

Do you regret having read those descriptions of yourself — or anything else in the journals?

Did Spalding seem more honest in his journals than he was in life?

He didn’t hide anything in his journals. In real life, he did, both in his monologues and in his day-to-day existence.

He used to say, “My monologues are only 90 minutes, my life is so much more.” In his art, he had to limit the story — he had to edit his life, his “truth.” He especially felt this after we had children together. He wanted them to develop on their own before he made them into characters. And in daily life, he couldn’t narrate every fear, every fantasy, every side of himself. I think he at least tried to do that in his journals.

Were there passages about your time together that you liked?

I found wonderful descriptions of our children and our family life. There was a passage I liked about how good I was at rallying the troops at holidays and how I was able to make the house and family feel such spirit and warmth. He appreciated when someone gave him a sense of family tradition or a peaceful home life.

Spalding also wrote a lot about his profound happiness as a father. I think that was his most satisfying role in life. It allowed him to love in a way he hadn’t been able to with anyone else. I was always taken aback by what an incredible writer Spalding was. The birth of our second son, Theo, was probably the closest experience we had together. Later, I read what he wrote about this moment and it was so beautifully rendered. And Theo — who was only 6 when Spalding died — will always have this well-documented record of what it felt like for his father to see him being born.

There are places in the journals where Spalding refers to “you,” as in a 1995 entry when he asked “Will you read this?” Whom do you think he was addressing ?

Spalding always thought about how an audience would judge him. This was true with everything he did. He needed a witness. I don’t see how that desire couldn’t have also crept into his journals at times too.

Is it scary to imagine your children reading the book?

The children — two of them — are now adults. The youngest is 14. It’s up to them to read this if they want. I don’t really worry about their being shocked by anything in the book. They knew almost everything about their father.

He made it clear to me that he was interested in doing this while we were together. He mentioned it every now and then. Once, after he read a review of “The Journals of John Cheever” in The New York Times, he suggested that there might be a book like this of his own one day. He loved the Cheever book. It was on his nightstand for many years. 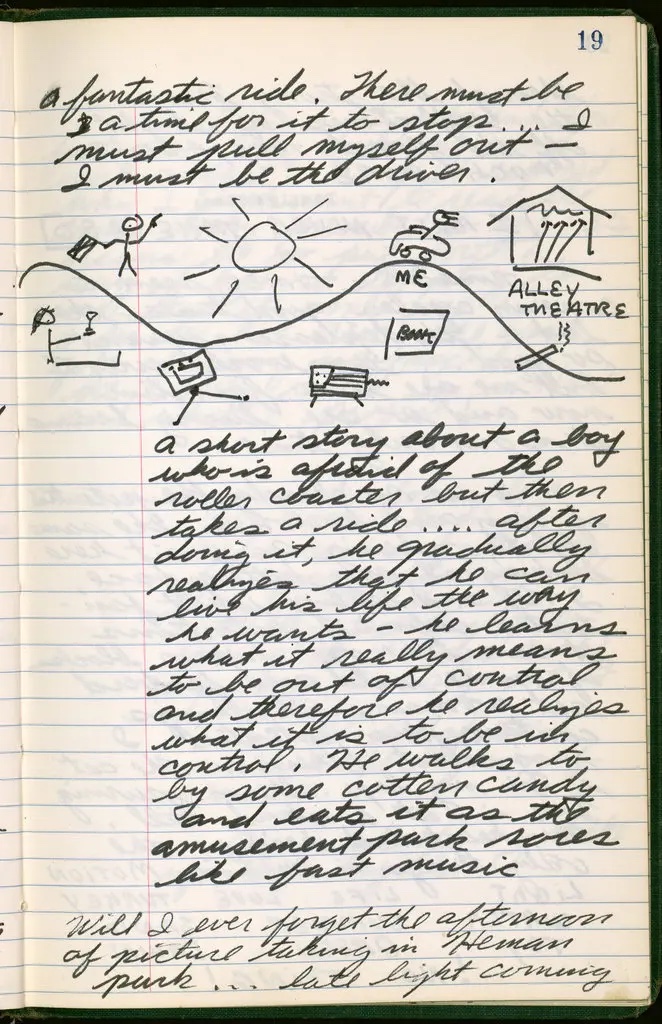 A page from one of Spalding Gray's journals from about 1969. Harry Ransom Center.