Tarajia Morrell is a writer who grew up at the table. Her essays and reportage have appeared in WSJ Magazine, T Magazine, Food & Wine, Cherry Bombe, and elsewhere. Morrell is also a consultant on various projects in the hospitality sphere and a partner at sustainable Brooklyn restaurant, Mettá.

Her online diary, The Lovage, is a joy. For visitors to Paris, her entry on Parisian restaurants and food is essential reading. Here, she reflects on a family terrace and the memories that sit out underneath the canopy, among the plants old and new. 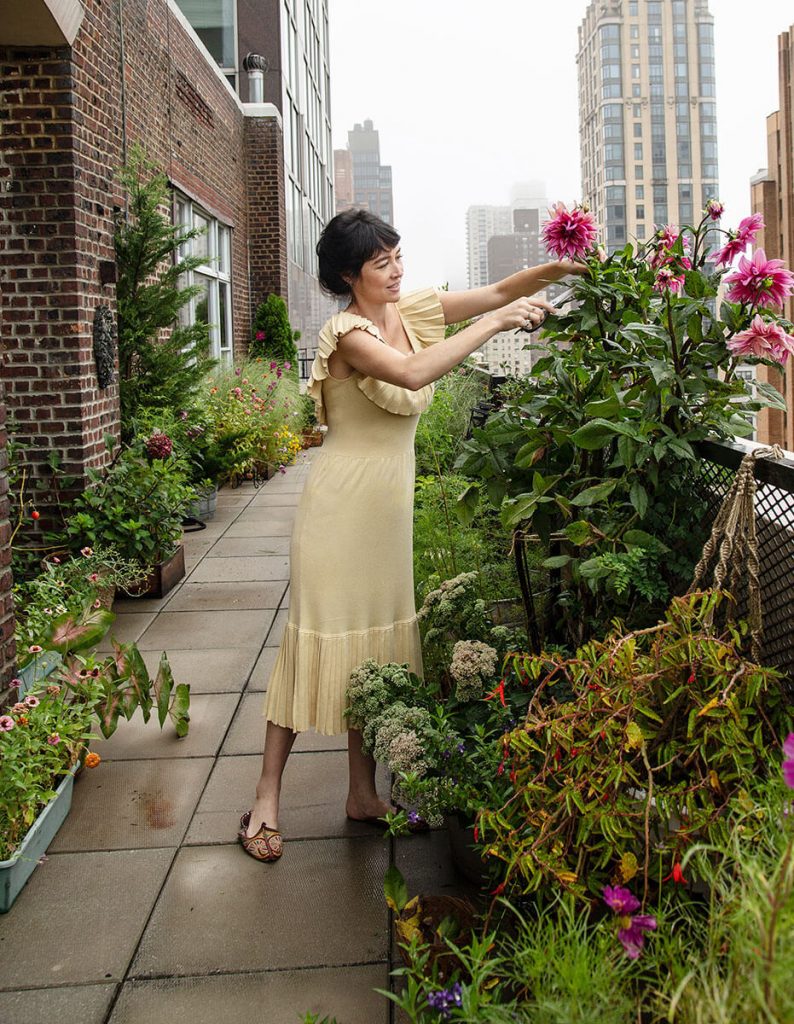 I’ve been spoiled by other people’s green thumbs. As a New York City kid, I watched as my parents created a verdant oasis on the terrace that wrapped around the old, eccentric, asymmetrical apartment I grew up in (it had been my dad’s bachelor pad before he met my mother, then their lovebirds’ nest until I came along). When spring arrived, my mother would till the soil of the many scavenged and assembled planters that together made the urban garden. Bulbs that had been stored in darkness beneath the kitchen sink were sunk into the loosened earth. Trees whipped all winter by fierce East-River-riled winds miraculously budded and grew green. When the fear of frost was past, we rented a station wagon, drove to a nursery, and filled it with layers of flower flats, like sheet trays of pastries, waiting for the sunshine to bake them into full bloom.

My mother began in ’73 as soon as she moved in. Whereas the interior of the apartment with its Arco lamp, shag carpeting, and waterbed still reeked of Dad’s bachelordom, the terrace was my mother’s blank canvas, and — raised as she was in the countryside by one of the all-time great green thumbs — my mother painted it vividly and enthusiastically. Rhododendrons with their elliptical leaves and pink flushes; rose bushes climbing trellises that Dad secured to the brick façade, cursing nails that bent and flew in the process; a red maple, delicate and fawned over; mums and marigolds exploding ebulliently out of boxes and hanging baskets; a petite but graceful dogwood — she practiced on all these botanical babies before I came along. She potted and pruned while her four-legged menagerie, a poodle and a tiger cat, followed at her feet.

In summer, all meals were taken on the terrace, under the dulling yellow-and-white-striped awning that protected the southern exposure from the oppressive sun and occasional downpour. During a blackout, my father even slept out there, the breeze seventeen floors up reaching him in the inky city like a balm. As a little one, I’d hear Mom watering the garden before she woke me, counting the minutes until she opened the door to my tiny room and sang my name. In the spring, she bundled cut violet stems in a wet towel for me to give my teachers. One summer, the science-lab rabbits, Max and Maxime, came home with us to live on the terrace, hopping or lying lazily upon the hot terracotta tiles, noses twitching. On afternoons and weekends, I played out there while my mother paid bills or gardened nearby. I climbed into a large planter and pretended the shaded pod below the leaves was my tree house; that I was a country girl; that I was Huck Finn. I picked raspberries from a scraggly bush and attached them to my fingertips. I knew to wait until the cherry tomatoes were about to burst and then merely nudge them into my small waiting palms. I thought all fruit had city silt on it when you plucked it. I read aloud to the snapdragons from Flower Fairies of the Seasons.

I grew out of that, of course. I grew out of the rabbit-hutch-like room that my mother ingeniously conceived of when my dad refused to abandon the apartment. I traded it for my own life in dormitories and studio apartments that didn’t have gardens. In my early twenties, I dated a man with a huge house in the Catskills and a garden that took up half a mountain, but I wasn’t ready to commit — to tending such a mammoth yard or anything else about the relationship. In my early thirties, I lived with another man and to get to our folkloric Brooklyn carriage house — an island with green on all sides of it — we walked through the garden of one of the world’s great landscape architects. Hers was seemingly effortless though thoughtfully planned, wild and fragrant, brimming with life and children’s voices babbling nearby like a sylvan stream. I moved to Barcelona with that long-lashed fellow who loved lemon trees, but by the time the sun grew strong in the conservatory room where he kept his saplings, I’d been evicted from our relationship. I’d never witness those trees bearing fruit.

It was a long time ago — Barcelona, love, lemon trees — and even longer since the dogwood flourished on the city terrace of my youth. That city garden was abandoned gradually as my parents built a sanctuary for themselves upstate, a garden where roots were welcomed deep into the earth and potted plants were only for geraniums that were brought inside in winter. In a final assault to the urban terrace’s one-time grandeur, the landlord vanquished the remaining stubborn trees and decaying old vessels. Over the decades, the roots of our plants, laughing at their confines, had tunneled between the terracotta tiles of the terrace floor making leaks in our neighbors’ ceilings. The lovely sienna tiles edged in moss that cooled my youthful soles were ripped out and replaced with bland grey concrete slabs. All our pots were confiscated, though for years they’d held only sad elegies of life: a persistent beach rose bush that refused to flower; the rotted roots of an old birch that gave up a decade before; a bonsai that had gone feral. When I reluctantly moved back into my childhood home, the terrace was once again a blank canvas and a stark contrast to the apartment’s interiors, where every surface was covered with dusty oenology paraphernalia, wine posters, fading furniture, and shelves bursting with vintner’s tomes — objects that had grown around my parents like fleece and now remained, matted and thick around me, at once comforting and asphyxiating.

I knew I should be glad of the terrace, its size, its potential, but its emptiness overwhelmed this neophyte. In my gardenless life, I’d hardly managed to keep a stag fern alive. I’d balked at the paperwhite bulbs my mother gave me for Christmas. And even if I could teach myself to nurture the plants, on this barren, windy, gray terrace, what — oh what — would I keep them in? Consciously or not, I was waiting for someone to guide me in my garden, someone to carry heavy bags of earth, someone to cook dinners for and eat with under the awning, as my parents had. Someone who hasn’t arrived. But spring doesn’t wait for lovers, it makes them, and so, as in all things that have eventually brought me the most satisfaction and joy, I learned by doing: I taught myself. I collected wooden Bordeaux crates from a wine warehouse; I carted earth from supply stores and young juniper fir shrubs from the farmers’ market. I ordered Japanese grasses and planted them beneath the big picture window that I look out of while sitting at my writing desk, and they whisper to me through open windows as I type.

A cluster of spiderwort, one of the only things to survive from my childhood, flourishes in an old steel basin, its purple flowers greeting me in the mornings between long verdant reeds. In an aged terracotta pot that my dad had affixed to the brick wall in the 1970s, a stubborn succulent stem remained, prehistoric, leafless, but not lifeless. I replanted that stub and now its silvery leaves and stems span a foot. I’ve buried dahlia bulbs, and though it seemed improbable that the brown tubers could amount to much, their shoots have poked through the earth to greet the sunshine and grown waist-high.

I want wildness that waves in the breeze and so I experimented disbelievingly with seeds, literally laughing at the notion that I could put these tiny, pinhead-size particles into the soil and that something might actually manifest. For days, I watered the seemingly barren earth and laughed harder still when, sure enough, little green shoots appeared. I sprinkled zinnia and cosmos seeds that shot up quickly, adorably, mocking me in my skepticism. Their seed packages tell me to “thin” them when they are two inches tall but, as ever, I find pruning difficult: the idea of taking away something hard won to make more room for something I can’t yet see, for growth without proof or guaranties.

I discovered an old book from the 1970s on organic urban gardening, and followed its instructions for a shortcut to composting. I turned my vegetable scraps into a smoothie and fed it to my tiny tomato seedlings, and they doubled in size virtually overnight. Now the first fruits are starting to color and it’s only early July. My clematis vine returned from last year, as did my trumpet honeysuckle, and these things together — these small predictable and yet implausible acts of nature — have made a believer out of me.

When I water it in the gloaming of a summer’s day, the mineral smell that rises up from the soil and hot tiles is the same as in my youth, a scent as specific and indelible as a scar.

I’m nostalgic for the garden of my youth, abundant and harlequin, but my predominantly green beginner’s version gratifies me. Simple as it remains, it obsesses me. I walk through it ten times a day and worry about it when I spend a night away. I look for old urns in junk shops and consider making a little grotto out of seashells. I water each plant according to the way it likes best. I fall asleep thinking of how I can improve upon it next year and I tend to it in my dreams. But most of all I ask myself what it is missing and the answer is not another boxwood, not a quince arbor or a new red maple, though those, too, would be nice. What is persistently missing is not a plant, but a person, a partner who remains a chimera. Missing, too, is the laughter of an unknown child — a descendant to dream in it; to water it when the sun has begun to set while I am preparing supper; to pick its violets to bring to teachers; to stain fingertips with its raspberries; to trap its centipedes.

And for my loneliness the garden teases me again, whispering to have a bit of faith that some forces are stronger than my vision; some forces, like the spring, will make things come, whether I believe in them, or not. 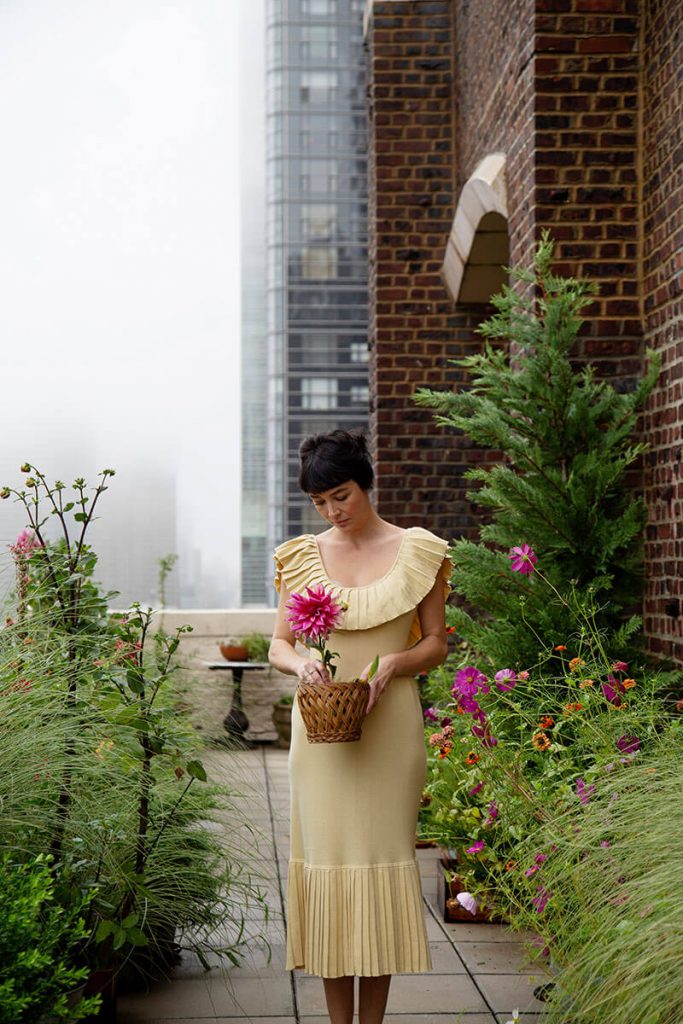