Peter Foges is an award-winning film and television producer. He worked for the BBC in London for fifteen years as a correspondent, an anchor, a producer, and a director, before moving to the United States to serve as BBC TV’s bureau chief. He is a professor at CUNY Brooklyn, and a member of the editorial board of Lapham’s Quarterly where he writes about history and ideas. He has recently completed a memoir.

If you happen to see Peter at a Hesperios event, stop him and say hello — he is a man of countless charming stories. What follows is one of his latest: some thoughts on ruins. The accompanying photographs were taken at Volubilis in Morocco, the ancient capital of the kingdom of Mauretania 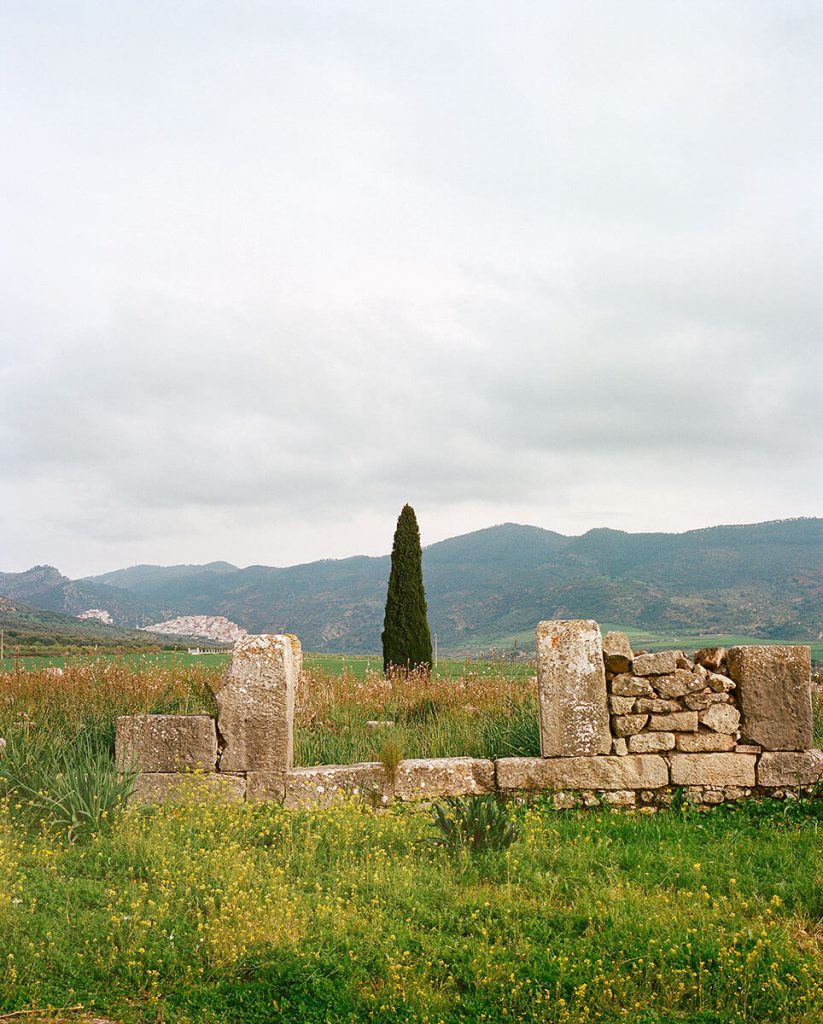 Travellers to the ruins of antiquity have always been drawn to the idea of past glory while ruminating on their own uncertain future. The broken stones of Babylon and Egypt lie strewn in deserts, those of the Inca and Maya in dense jungles or on high peaks — physical testament to the hubris and transience of power. Part of the bittersweet melancholy of wandering through ruins is the sense we are witness to our own fate as we humbly contemplate our utter irrelevance in the face of eternity.

Three years after the Battle of Waterloo, with Britain basking in the highest summer of its historical glory, the English Romantic poet Shelley dreamed of downfall and decay. In his fourteen line sonnet “Ozymandias” he tells of a jumble of stones recently unearthed at Thebes. The stones were the remains of a statue of Ramses the Great, supreme ruler of ancient Egypt, a man-God, and the tyrannical conqueror of the known world.

Towards the end of his great poem, Shelley recounts the inscription on the pedestal:

“My name is Ozymandias, King of Kings;

Look on my Works, ye Mighty, and despair!”

He then paints an image of nemesis as nature erodes what humans made:

“Nothing beside remains. Round the decay
Of that colossal Wreck, boundless and bare
The lone and level sands stretch far away.”

In the early eighteen hundreds, it became fashionable to dwell on the downfall of ancient empires — fuelled perhaps by the astonishing archeological discoveries made by the French army in Egypt and the huge popularity of Gibbon’s late eighteenth-century masterpiece, The History of the Decline and Fall of the Roman Empire. There was also the proliferation of fake ruins and follies on aristocratic land. Windsor Great Park for instance — a royal domain — reveals Roman columns amidst the verdant oaks. This is the Temple of Augustus, a pastiche of crumbling Roman architecture transported from the dry desert of North Africa to damp English earth. Behind it lies a story typical of the age. In 1816, a British officer visiting the ruined provincial city of Leptis Magna, on the Mediterranean coast of Ottoman Libya, was struck by their splendor. Under Emperor Septimius Severus, in the second century AD, Leptis had been among the most important cities in North Africa after Alexandria and Carthage.

The antiquities of Leptis were duly stolen in the name of the imperial British Crown and transported by sea. Rejected by an unimpressed British Museum, the twenty-five pedestals, twenty-two granite columns, fifteen marble columns, ten capitals, ten pieces of cornice, seven loose slabs, five inscribed slabs, and various fragments of sculpture were then handed to King George IV’s architect to make of them what he could. He elected to create a wholly fanciful folly with them in the royal park — a sort of Roman riff.

Many artists have used ruins to make political statements. In 1830 the British architect Sir John Soane even hung a large sketch at the Royal Academy depicting the Bank of England, the rock of British prosperity, as a wrecked and ruined hulk — a scandalous prophecy of London’s unthinkable early demise.

Alongside this quasi-erotic fascination with decay and decline were grandiose plans, following Napoleon’s defeat, to reconstruct London in the style of Rome — as would befit the largest and richest city on earth. Just as Trajan and Titus were awarded columns and arches to celebrate their victories, so were British commanders similarly feted in the long nineteenth century. Nelson, of course, got his column in Trafalgar Square and a naked God-like Wellington adorns a victory arch in massive bronze. Minor generals, long faded from memory, straddle lesser plinths. The capital took on a classic tone, presaging a new Augustan era of monuments, colonnades, and temples built along the River Thames, now reimagined as the Tiber. 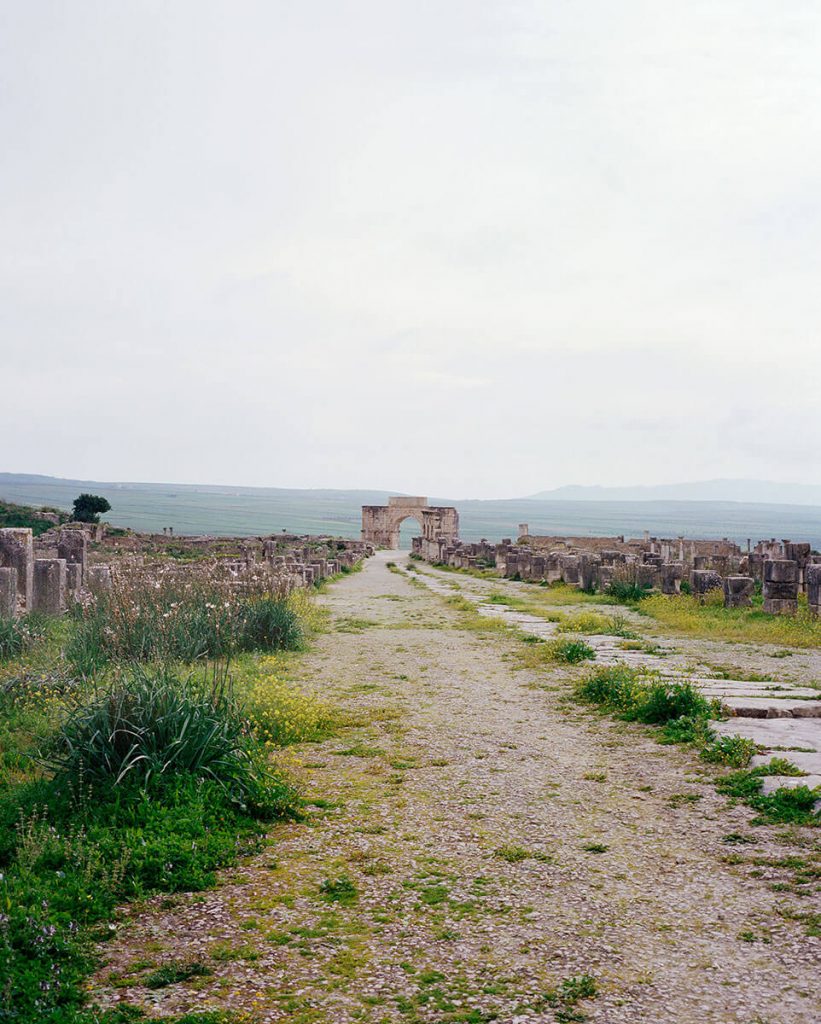 Hitler, too, turned to Rome. In 1937 he charged his favored court architect, Albert Speer, with refashioning Berlin on Roman lines. The plan he came up with was gigantic: an east-west, north-south axis with a forum at its apex intended to host a million; a copper-covered dome a thousand feet high inspired by Rome’s Pantheon, topped by a gigantic German eagle; a triumphal arch dedicated to fallen German warriors, designed by Hitler himself, that would dwarf all others. In short, a parody Rome; Berlin renamed “Germania,” the capital of an all-powerful, victorious Reich.

Hitler — a wannabe architect himself — liked to philosophize late at night that Germania’s purpose would be to “transmit our time and its spirit to posterity — to be a bridge of tradition to the future.” But how best to do that? The steel and concrete of the twentieth century would surely make for ugly ruins, not fine romantic ones. Speer solved this aesthetic conundrum for Hitler by formulating his theory of ruin value. By using carefully quarried stones, and special construction techniques, he assured Hitler, “we shall enable Germania to decay naturally over millennia and one day resemble ruins similar to those of Rome.” He even had drawings made imagining the future capital in an advanced state of decay for Hitler to approve.

Nothing beside remains… Of Germania there is no trace. Today the only ruin that commemorates Berlin’s wicked past is from an earlier era — the ugly Kaiser Wilhelm Memorial Church left burned out and bombed at war’s end on the shiny vulgar Kurfürstendamm. There are no sweet romantic remains. The central city is new.

The bible of those who suffer from “a fascination frantic / In a ruin that’s romantic” is Pleasure of Ruins: a passionate, eccentric ode to antiquity by English novelist Rose Macaulay, published in 1953. The very place names she drops are a kind of poetry: Tyre; Avalon; Palmyra (where “Lady Hester Stanhope did not take her ruin pleasures quietly”); Baalbek; Nineveh; Babylon; Thebes (“possibly the most impressive assortment of ruins anywhere”); Mycenae; Knossos; Persepolis; Susa; and Athens.

In soaring prose she writes of “the ascendancy over men’s minds of the ruins of the stupendous past, the past of history, legend and myth, at once factual and fantastic, stretching back and back into ages that can but be surmised. … The intoxication, at once so heady and so devout … is the soaring of the imagination into the high empyrean where huge episodes are tangled with myths and dreams; it is the stunning impact of world history on its amazed heirs.”

“For dust thou art, and unto dust shalt thou return.” 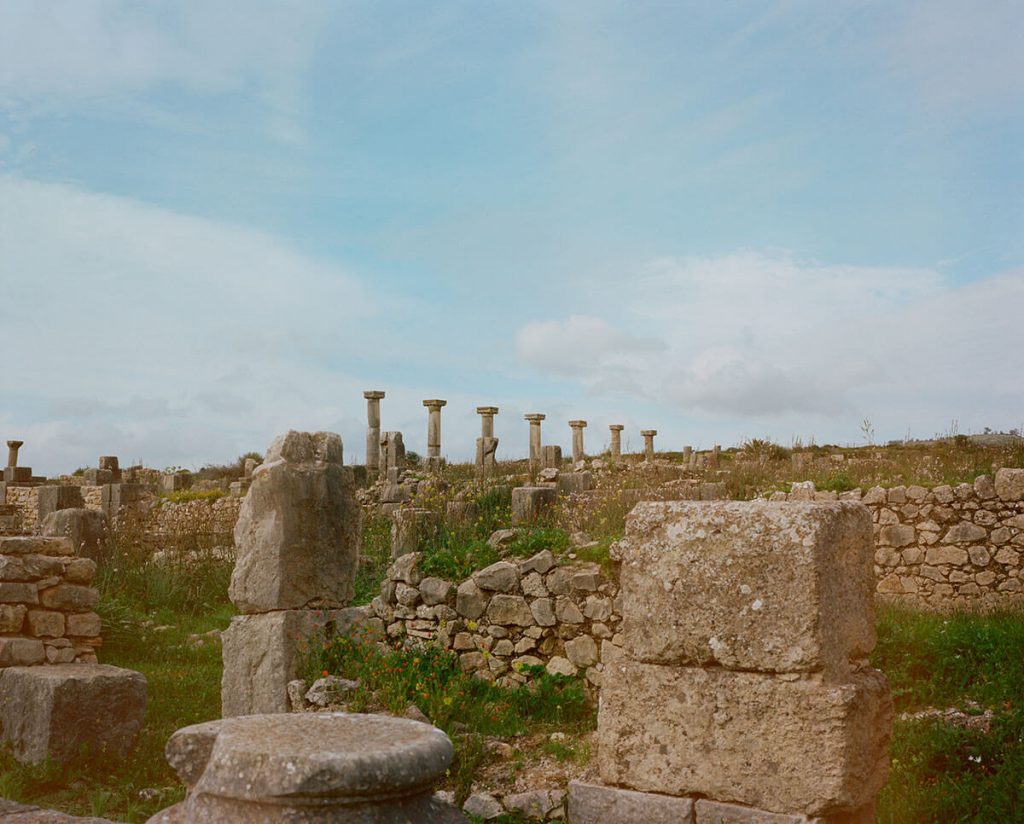 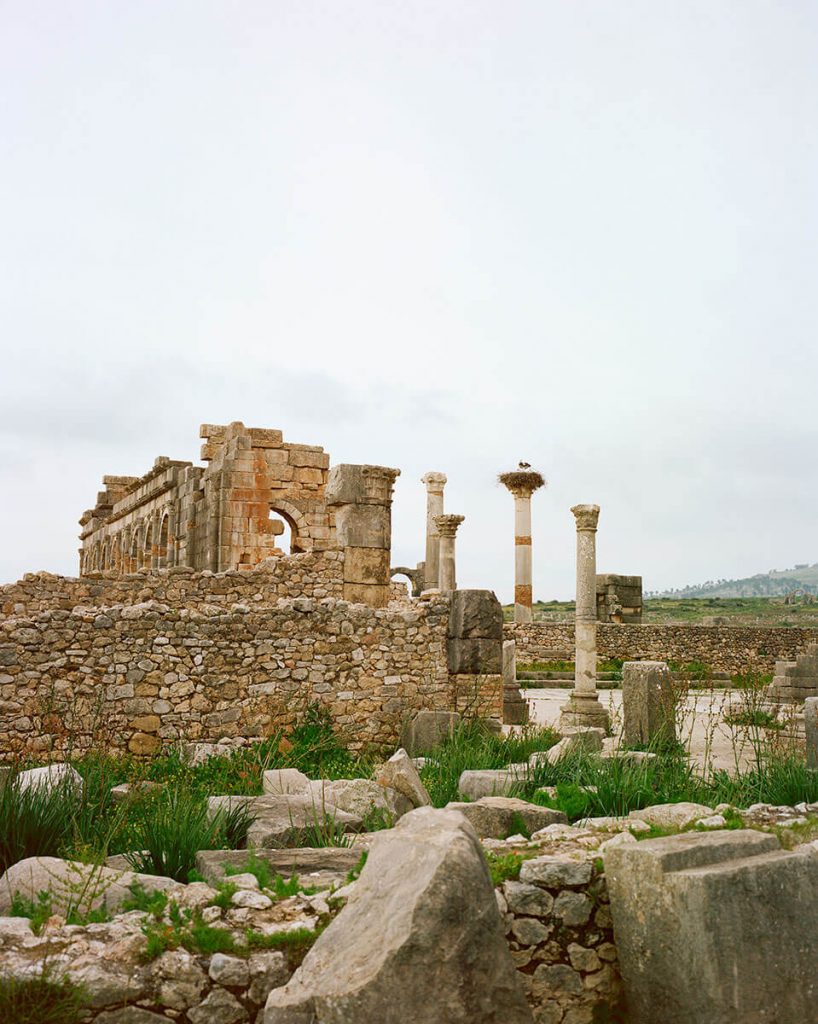 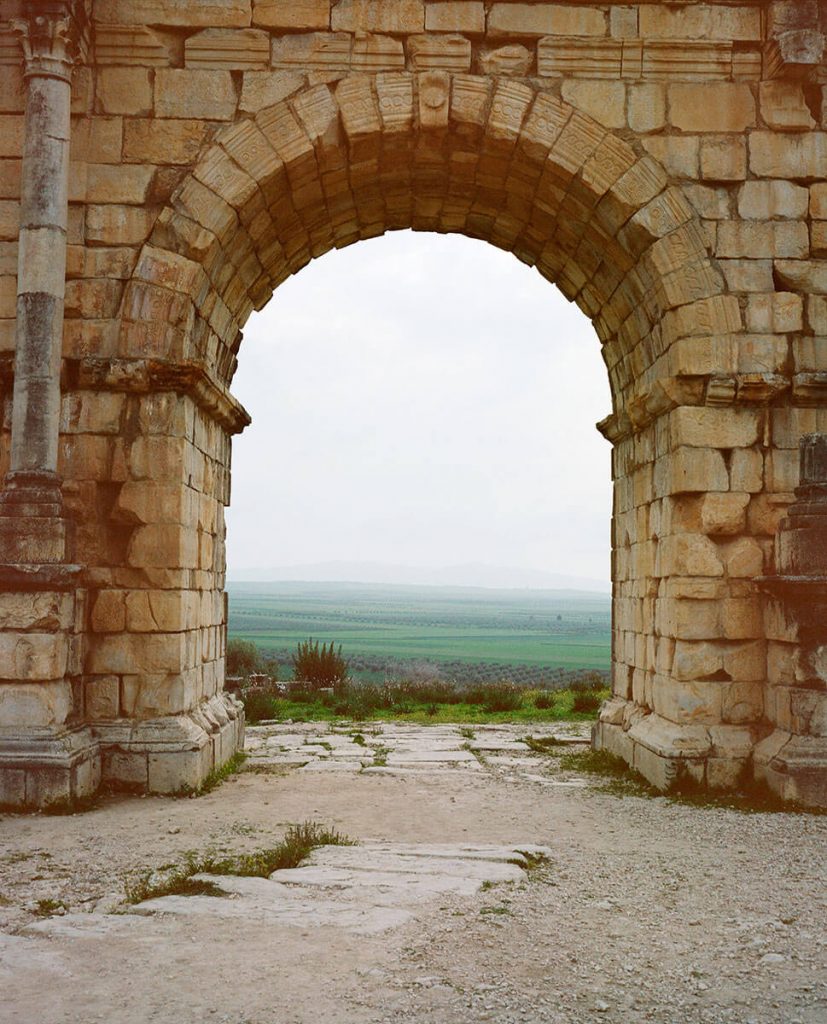 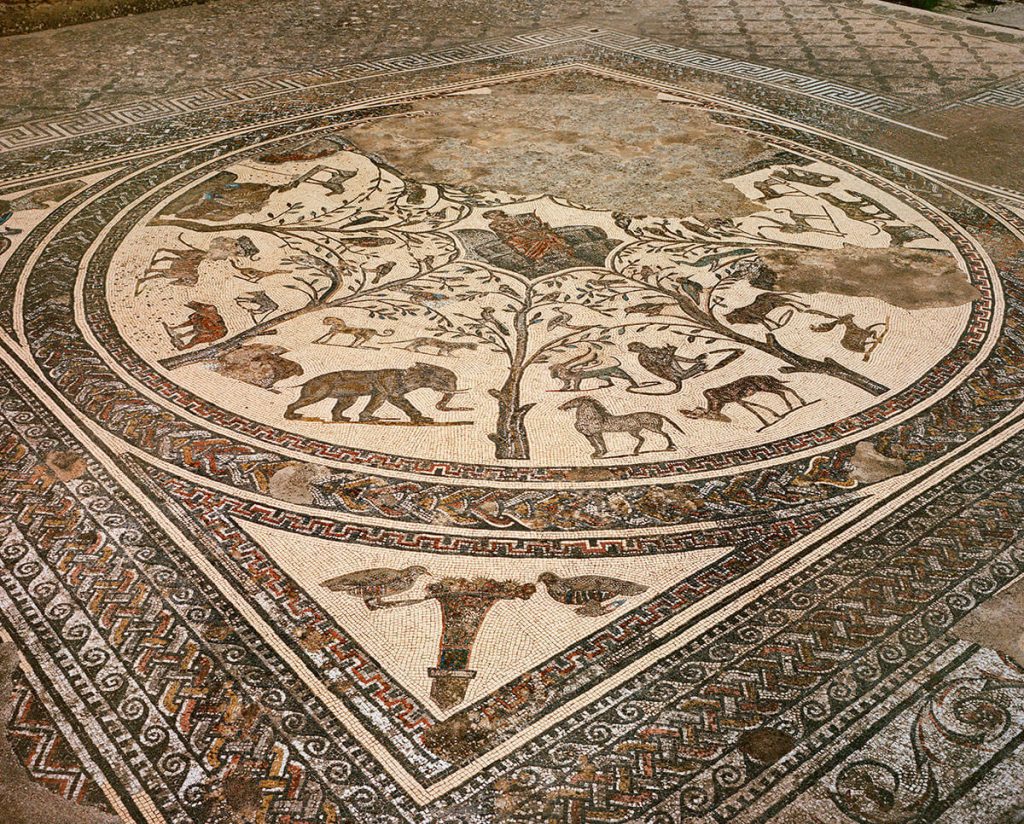 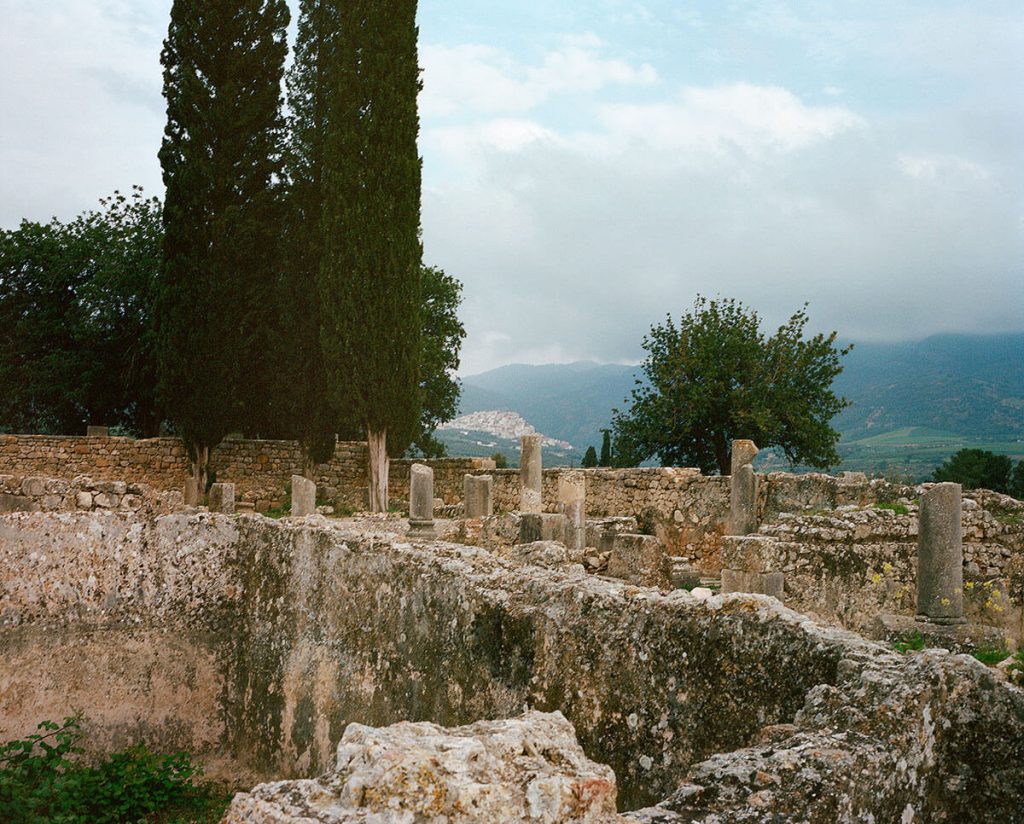 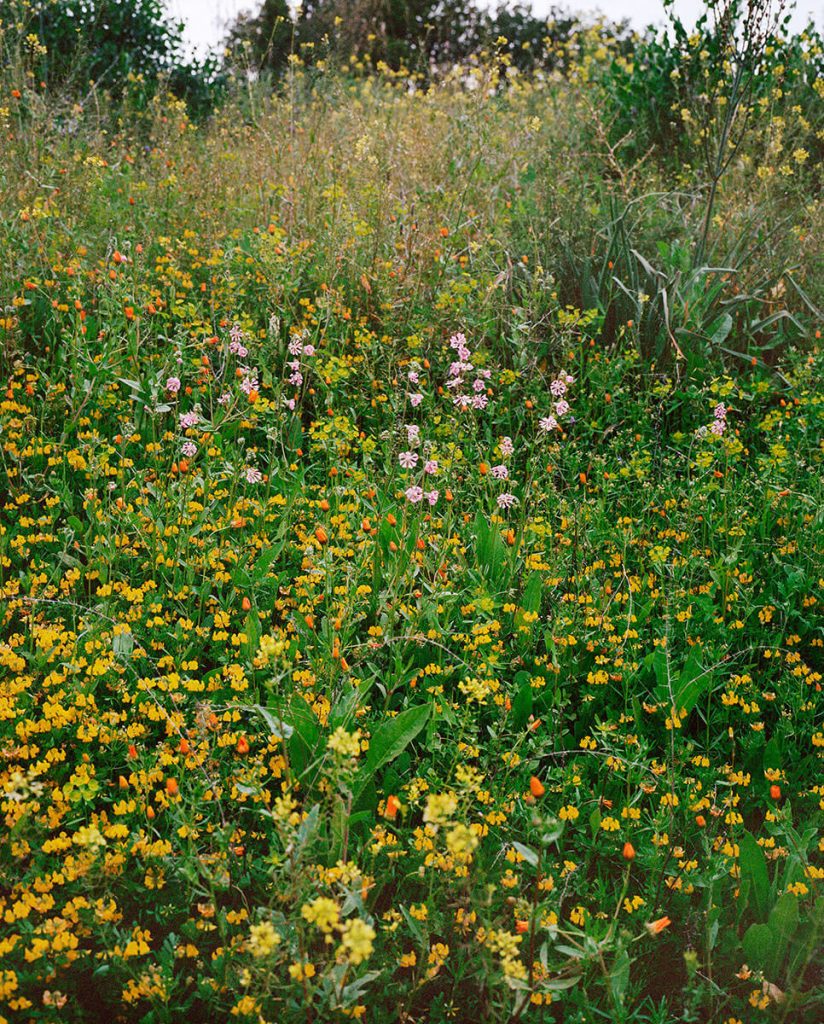 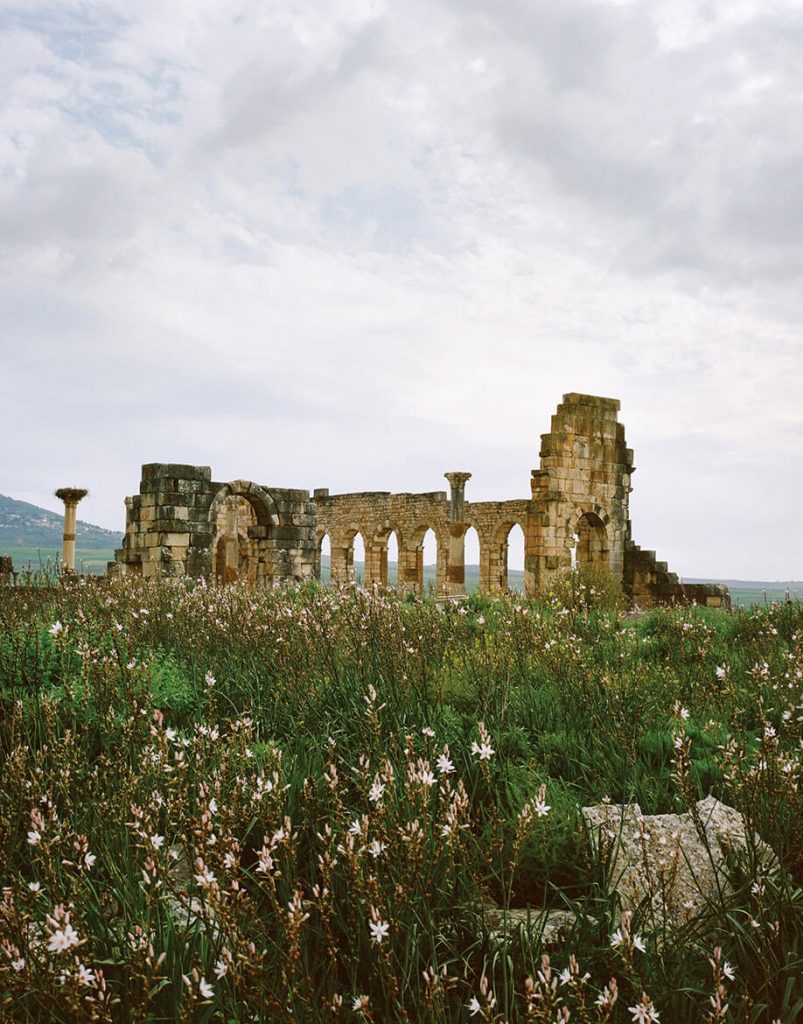 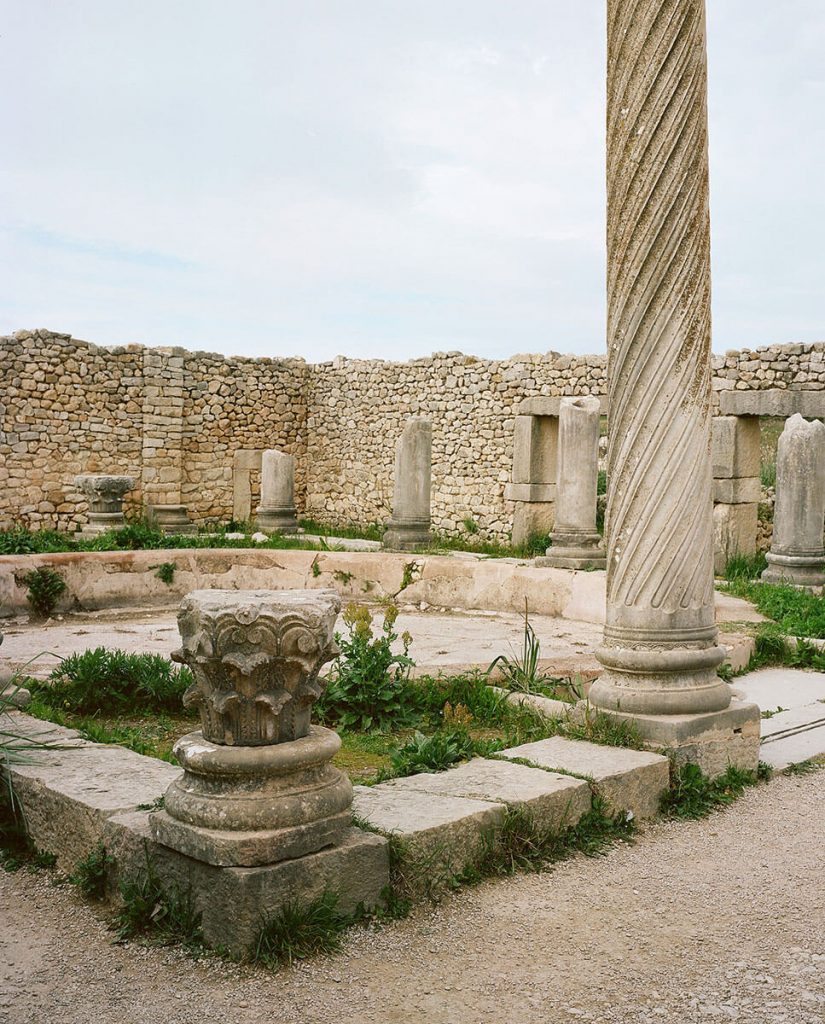 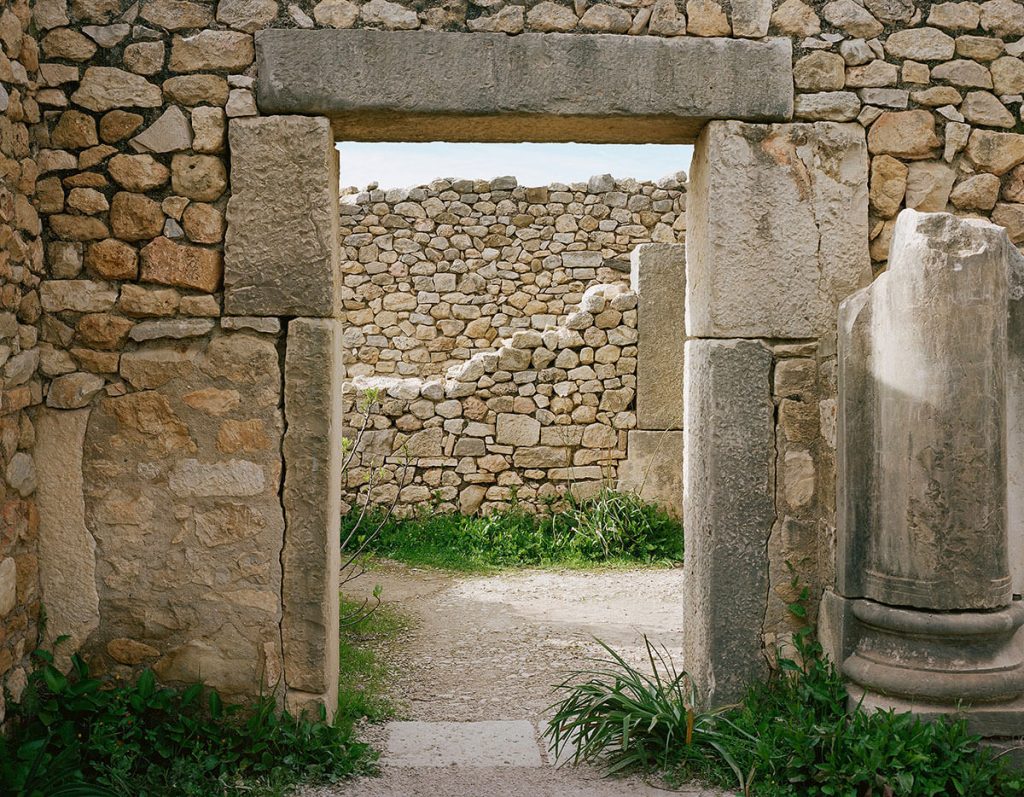 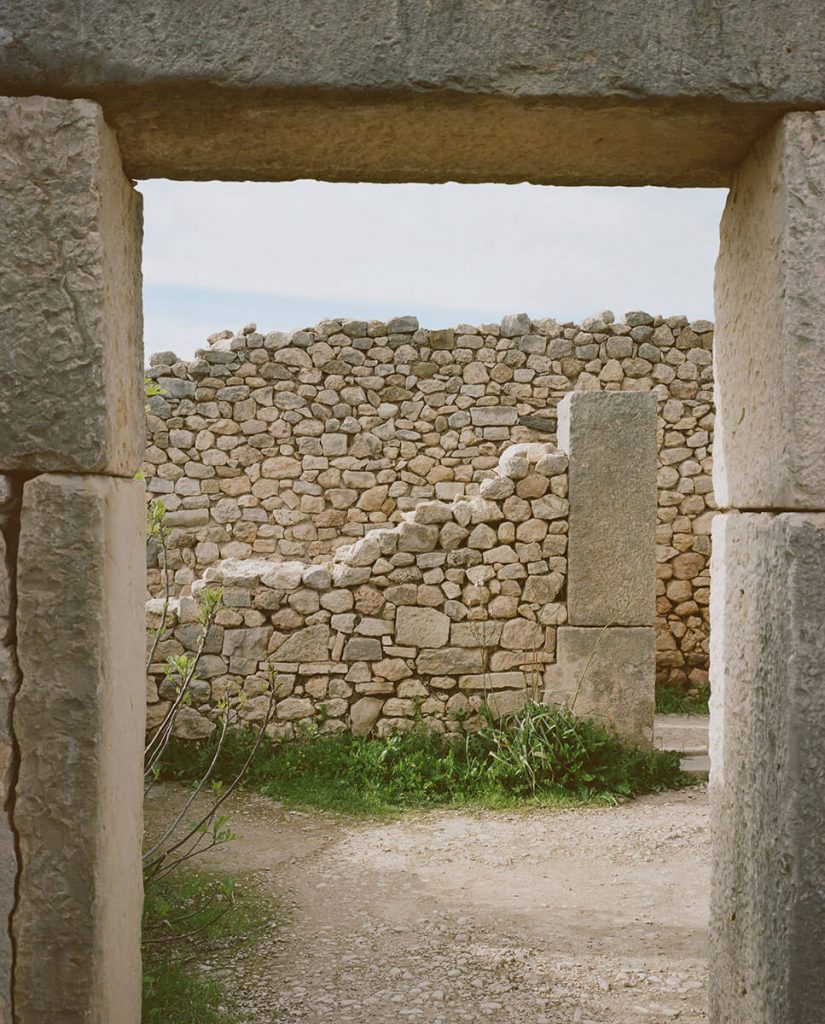 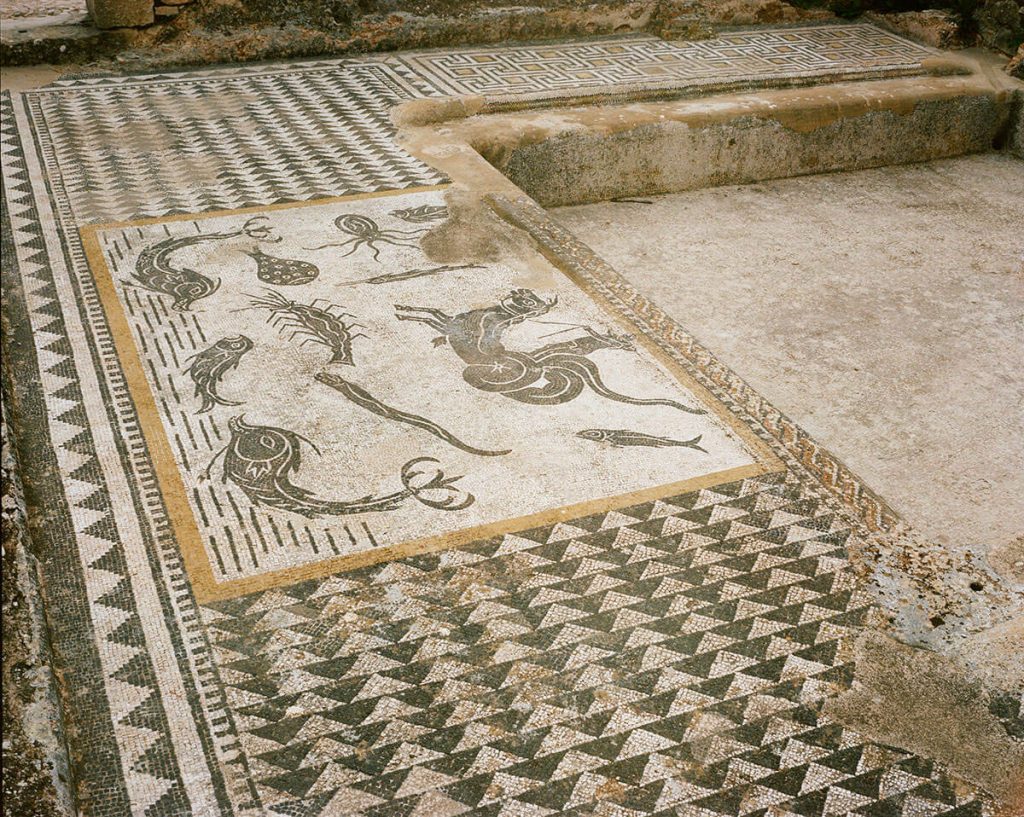